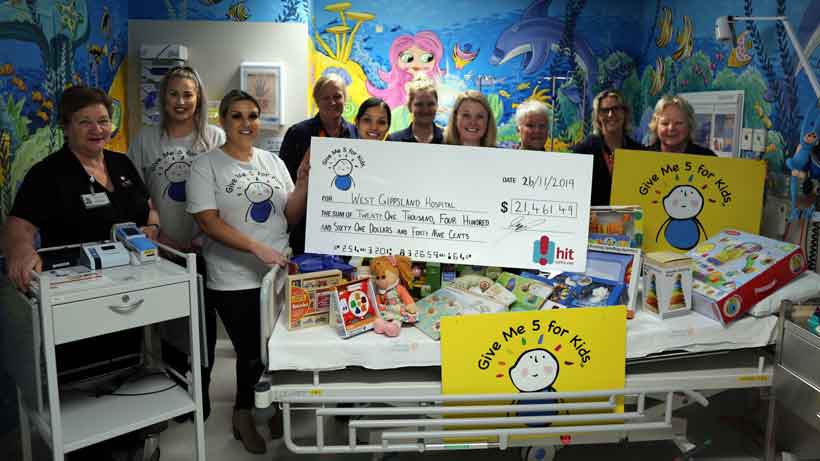 Give me 5 for kids helps Children in Hospital

Gippslanders have dug deep for the annual ‘Give me 5 for Kids’ campaign run by Southern Cross Austereo which has raised a record $42,922.98 to be distributed equally to West Gippsland Hospital and Latrobe Regional Hospital. IT Gippsland held the fundraising campaign from April through to July this year promoting events including a Trivia Night, Wear your PJ’s to work days, a kids disco, as well as on-air radio auctions and other community activities.

Presenting a cheque for $21,461.49 to West Gippsland Hospital, HIT FM’s Danica Culliver and Jessica Evans said they were thrilled at the response to the campaign this year.

“In addition to almost tripling our donation total, we were also pleased to receive many gifts of new toys from businesses across the region to support the playrooms at each hospital.”

West Gippsland Healthcare Group, Director of Clinical Operations, Kathy Kinrade, said the donation had enabled the purchase of a life-saving I-Stat machine for its birthing suites and paediatric unit.

“This machine enables point of care blood testing of babies and young patients. This means unwell patients can have their blood tested at the bedside and results provided within a matter of minutes rather than waiting for results from a pathology lab.”

The Paediatrics Unit (Children’s ward) will be able to replace all of its old recliner sofa bed chairs for parents or carers to sleep on when their child is admitted to hospital for an overnight stay.

Nurse Unit Manager, Justine Longman, said this would make a big difference to the experience of children and their patents.

“The current sofa bed chairs are in need of replacement, one is broken and not fixable and others are well used and not easy to move around. We thank everyone who donated and also for the lovely toys which will be welcomed by our young patients.”

The ‘Give me 5 for Kids’ annual fundraising campaign began in 2003 and has been well supported each year by the Gippsland community.